The most effective messages are the ones that stir up the things inside you. The best expressions create afterthoughts well after you first perceive them. This can be in the form of a song, movie, or even a comic you see while scrolling through your social media timeline. The trick is to keep your eyes open. I came across a comic from The Perry Bible Fellowship last week that did some stirring. As a semi-regular reader of the comic (which debuted in 2001), rarely have I found an expression with a political connotation, or something that could be seen as such. 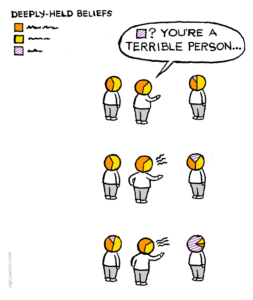 The comic had me thinking about the current state of things and the way I’ve been approaching them. It doesn’t want you to laugh and move on, but forces you to think of what it means to be considered a terrible person, how it feels being told so, and the effect is has on people around you.

The only additional context provided is: “Shaming is not an effective strategy”.

Everyone is free to interpret what they like, but here is my insight. People share many things in common with each other. There are trivial things like being born on the same day, a common love for kung-fu movies, or a preference in food. This is no different with our deeply held beliefs. What could these possibly be? What are those couple of things we should refrain from mentioning in public?

I can’t think of three, as the comic suggests, however I know the feeling when someone learns that one of your beliefs doesn’t align with someone else’s. Even if you see eye to eye with more common beliefs, it’s that sliver of difference that can divide people.

As art imitates life, the minority belief grows within the ridiculed. The negative connotation becomes their most defining belief. Being called a terrible person, paired with negativity and finger-waving, paints the picture people want to see. It eventually becomes a part you. Note that this belief is not specified as something you would consider as positive or negative, which is part of the point.

Within the last ‘frame’ of the only comic panel, the silent bystander starts to take on the chastised belief. The terribly perceived qualities must not be so terrible to everyone, as it affects those around us by bringing light to it.

The best part of the comic is that it doesn’t give you an out. There is no explanation, no direction on how you're supposed to feel. Just enough to find your own interpretation. You can be trying to figure out what that ‘terrible person’ belief could possibly be, and how you would feel if someone aired out your dirty laundry. Forming an opinion you never had before.  Or what you would do if you found out someone close to you believed in something you detest, the things that make you cringe when as you scroll through FaceBook.

Think about each of the three people and try to visualize yourself as all of them. We have all been each of those people at least once, so think about what you will do the next time you’re there. And consider that shaming might be the first instinct, that it is probably not an effective strategy.

If you’re feeling a bit hungover from looking into this, you should be. It’s hard to tiptoe around serious topics for long until you hit the nail on the head and have to deal with them. My suggestion would be to read some of the other, wonderfully tongue in cheek, dark humor PBF to get you back out there. I personally love Fun Bot the most.